Project by the Gamaraal foundation
Scroll

The Life of an Academic

I am often asked why a Jew and Holocaust survivor like me became, of all things, a Professor of German. The rhetorical question implies the desire to see Germany punished for giving birth to National Socialism. We must defend ourselves against terrorism, but those who respond with hatred to everything German seem to have fallen as low as the Nazis themselves. I believe that we shall not be able to prevent a recurrence of the devastations inflicted on the world by National Socialism until we have recognised the positive as well as the negative aspects of German culture. As a teacher of German language and literature who was born in Hungary and grew up in Switzerland I feel that I can make a worthwhile contribution to humanity’s understanding of the dialectic of creative and destructive forces that have filled the history of Germany over the centuries with alternating triumphs and disasters. 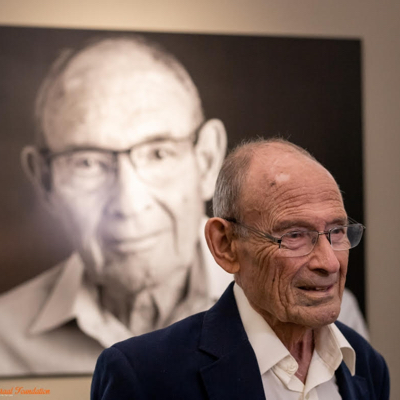 Mother dies of TB. He moves to grandparents in Cluj. Attends Jewish Gymnasium

May - June: Imprisoned in Kolozsvár ghetto. Escapes with father to Budapest.

In refugee home in Caux and Youth Aliyah home in Bex

Takes up position as German Lector, University of Sussex, Brighton

Promoted to Professor of German

Retires from the University of Sussex as Emeritus Professor.

Continues to teach and write

Moves back to Zürich

Challenge to the Murderers – A fulfilled Life

Imagine a child growing up in a small East European town in the 1930s oppressed by his mother’s fatal illness and his father’s disabling old war wound. Imagine this child’s frustration at being called “Stinker”, attacked with stones by gangs of street urchins and watching a hostile new teacher replace all the “excellent” marks in his primary school report with “insufficient”.

Imagine the child’s sense of exclusion, when he is suddenly forbidden to play in the town park, swim in the public pool, watch Tarzan’s and Popeye’s adventures in the cinema round the corner, or when he is woken from his dreams of being a doctor, a lawyer, a manufacturer or a theatre manager by being told that he is forbidden by the law to enter such positions.

Imagine the embarrassment of the child when he is ordered to appear in public with a yellow star sewn on his clothes, or his helpless fury at having to leave his house and let greedy neighbours rummage through his precious possessions.

Then try to share the shock of the child when he is brutally loaded with his family on the back of a lorry by armed gendarmes and imprisoned in a disused brick factory, the “ghetto”.

Finally guess what goes on in the child’s mind as his father takes him by the hand and the pair escape from the ghetto, while the rest of their relations are deported to a concentration camp called “Auschwitz”, where most of them are killed with poison gas.

In fact, the child does not hear about Auschwitz until he has spent five painful months in another notorious camp called “Bergen-Belsen”, where 50’000 men, women and children died towards the end of the Second World War as the result of total neglect.

It is hardly believable that this child survived Bergen-Belsen as the almost only member of his generation. An agnostic who does not believe in supernatural intervention would probably attribute his rescue to three very human factors: the self-sacrifice of a father who would have starved to let the child have more food; the diplomacy of a Jewish Zionist called Rezsö Kasztner who paid Adolf Eichmann, the “architect of the Holocaust”, a ransom for the release of 1700 Jews; and the Swiss government’s change of heart and allowing a few thousand Jews into Switzerland towards the end of the war after returning tens of thousands to their countries of origin, where they died at the hands of Germans.

One would not be surprised to hear that after such experiences this child had spent the rest of his life as an embittered, diffident, self-pitying loner. What is surprising is that by most reports he developed into a highly regarded language and literature teacher who enjoyed a stable relationship with his wife and two daughters. And this would seem to be the right moment for me to confess that the “child”, i.e. both the hero and the narrator of this story, was me.

It is common knowledge that surviving parents and children rarely talk to each other about their experience of the Holocaust, possibly because of their fear of painful memories. This was also the case with my father and me. Once we were in Switzerland we soon stopped looking for our murdered relatives and began to concentrate on our immediate needs. My father built up some business connections and I attended a number of schools where I almost seemed to have forgotten the Holocaust for long stretches of time.

But such a repression could not last forever. When I was not troubled by bad dreams or anxiety attacks I was haunted by a sense of emptiness inside that asked to be filled, a task that I had put off, a duty that I shirked. I gradually realised that I had to identify with my people and to share their joys and sorrows in order to be me.

I began to study the history of the Holocaust and National Socialism and I discovered an ideology that disguised lies as truth, cowardice as courage, slavery as freedom, perversion as normality, and inhumanity as a virtue. It was an ideology that glorified hatred, aggression and destruction: an ideology fuelled by obsessive anti-Semitism; and an ideology dedicated to the physical annihilation of all Jews. The memory of the monstrous crimes of the Nazis would not leave me, and I tried to defend myself against it by letting my life unfold before my inner eye and comparing the Nazis’ pretences with the sober reality.

I imagined an archetypal Nazi who was after my blood and who persecuted me relentlessly, hoping to see me die. But it turned out differently.

If I look back from old age a pattern emerges whereby every one of my smaller or larger successes turned out to be a blow in the face of this Nazi. Whether I was receiving my Doctor’s Diploma at the University of Zürich or moving another rung up the academic ladder, he was unable to do anything but watch. As my lectures and seminars grew more and more popular he was forced to keep quiet. The higher my articles were rated the less notice was taken of his backbiting. My hours of happiness with my family and friends were out of his envious reach. My health continued strong for all the poison he spat at it.

The Nazi who was desperate to see me destroyed had to accept his defeat on each occasion, while for me every practical problem resolved itself almost automatically as soon as it appeared on the horizon. To put it simply, the Nazi and his fellow-gangsters wanted me dead because I was a Jew, but I was still alive and well despite their efforts, and so were many more Jews. The creative forces were on our side. Life as such had been given to me as a weapon with which to defend myself against my deadly enemies, or even to defeat them. To show what I mean by using human life as a weapon against despair I switched on my computer and wrote down the history of my life which follows.